Now accepted by Webster as a synonym for Marine, the term “Leatherneck” was derived from a leather stock once worn around the neck by both American and British Marines–and soldiers also. Beginning in 1798, “one stock of black leather and clasp” was issued to each U.S. Marine annually.

The globe on the U.S. Marine emblem signifies service in any part of the world. The eagle also indirectly signifies service worldwide, although this may not have been the intention of the designers in 1868. The eagle which they selected for the Marine emblem is a crested eagle, a type found all over the world. On the other hand, the eagle pictured on the great seal and the currency of the United States is the bald eagle, strictly a North American variety. The anchor, whose origin dates back to the founding of the Marine Corps in 1775, indicates the amphibious nature of Marines’ duties.

United as one, we are the LEATHERNECKS NATION MOTORCYCLE CLUB!

Your grateful donation will go towards the causes we support. 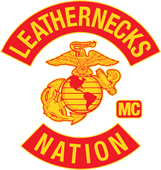 Our members consist of a very special breed of person. In most military services, you can be all that you can be, but the members of this club who joined the Marines, found themselves being more than they ever thought possible.